How about an end-of-the-Tuesday Table Topic? 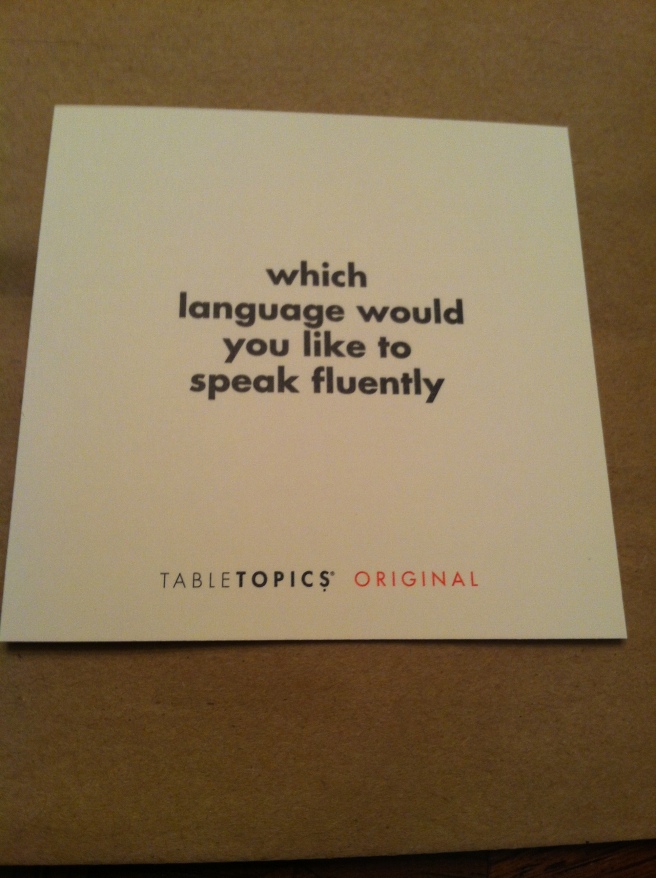 I only speak English fluently, unless you count Southern as a language. But my Southern phraseology skills are fading fast. I had a love affair with Spanish, a brief fling in college when I read novels and wrote poetry in that saucy language. But I could never speak it well. (Although I have fancied myself a natural latina mamacita in the middle of a Zumba class or two).

But. If I could be fluent in any language, I pick Italian. The love language. The language of the Renaissance and revival. If wine is bottled poetry, Italian is that wine uncorked. Each voluptuous sentence seems to promise love or music or the best pasta you’ve ever put in your mouth.

And I love that Italian is not just the words that fall out of their lips. Italians feel each syllable all the way to their clenched, shaking fists. No matter what they’re saying (and unless it’s “cannoli” or “vino” I have no idea what they’re saying) it all sounds like kiss, kiss, hug, hug, let’s all go have dinner, have a smooch and have a nap. And that’s one happy serenade.

Now, the expert panel is up.

My sister Lindsey, the attorney, says:

And this is my favorite answer of Javi‘s yet:

I speak a second language pretty bueno, you dig-o? It’s rad. I use it all the time. At the ATM I’m all BOOM! Spanish option por-favor! Put those dolares in my manos! At the lunch trucks I’m all “Burrrrrrrrrrrito!” – rolling my r’s harder than Eartha Kitt doing an impression of a lawn mower. Spanish is fun and fast, yet has a relaxed swagger to it. There is joy to it. Music in it. But, as much fun as Spanish is, Spanish can be a chauvinist ass. Spanish separates words by gender. GENDER! There are boy words and girl words. Que the heck, Spanish! There is no reason for it! I wish there was, because Spanish, otherwise, is really great to be around. I wish I could say, “Listen, Spanish has been through some rough break ups and as a result is a little jaded.” Or “Spanish only says that stuff when Spanish drinks.” But I can’t. Spanish is just kind of a jerk face. But who else am I going to hang out with? French? French, with its baby talk tone and close talking. Cooing with lips puckered. Ugh. I get it, French. You’re an insatiable romance language, but I’m trying to eat here! Get a room. Or, just, please, stop breathing on my neck for a second, French. It’s weirding me out. I like Italian a good deal, mostly because it is amazing what Italian can get away with. Italian can yell for no reason, bang on a table like a Viking for flair, and every once in a while, Italian will haul off and slap you in the face and it is totally ok. It’s just crazy Italian, doing what Italian does. Kissing babies and slapping people in their FACES because, hey, Italian. Everyone is cool with it. What a charming bastard that Italian is. The East Asian languages are all business – structuring sentences with topic first, then comment. They’re read top to bottom OR left to right. They’re sometimes written with a BRUSH! I can’t even sketch well… East Asian languages are beautiful but so intense. They don’t mess around. And speaking of intense… I hung out with German one night… yeah… that got out of control quick. German started slamming consonants together so recklessly and things got real frightening and loud. I don’t like to talk about this but, at one point, German made me drink beer out of a shoe. A SHOE! But, what was I going to do? I was so scared. My body wasn’t right for at least three days after that night. German still calls me to get together every once and a while, but I can’t do it. However, if I were to learn another language fluently, it would probably be whatever the hell language girls are speaking these days. Seriously, I have a hard enough time talking to girls as is due to soul crushing nervousness and anxiety, and now I have to decipher what “totes amaze” means? Thanks for nothing Google Translate.

Moi? French. But living in Florida, it’s about as useful as giving Mickey Mouse a pair of 5-fingered gloves. I’ve taken seven years of this romance language {what does that even mean?}, and the better I got at it, the more I wanted to move to France. Because, clearly, that’s the next step after learning a foreign language — moving to its country of origin. I got to visit while I was in high school, and it was everything I imagined. I was basically fluent. Or was I just in France speaking english to the French? Semantics. Voulez vous coucher avec moi– what??

What about you? What language would you pick?