WHAT FIVE FOODS DO YOU WISH WERE BANISHED FROM THE EARTH?

It’s a little absolute, I know. So I apologize if I banish something you can’t live without.

#1. My first answer (read: gag reflex) is eggs. Ew. The thought of them, smell of them, taste, texture, existence of them as a food source, completely icks me out. I don’t remember when I first hated on eggs, but I’ve never looked back.

I do love cake—cupcakes, breakfast cake, birthday cake—as much as I hate eggs. I’m just in denial that those globes of gross have ever been cracked into any batter.

But I heart ice cream, yogurt, cheese. Hello, cheese. And I also take a little coffee with my half & half. Go figure.

#3. Bologna. What a mystery of a meat. Just look at the way it’s spelled and pronounced. A hodge podge of rejected meat pressed together into a perfect circle? No, thank you.

#5. Candy corn. Okay. I’m the kid who would often trade her sandwich for a friend’s dessert in the lunchroom (sorry, Mom). I love cake for breakfast (see #1). I have sweet teeth. So, I haven’t met many sweets I didn’t want seconds of.

Candy corn does not equal candy. Or corn. Is it even edible? It’s colored, triangular wax posing as a treat. Beware, kids.

Now, to detox from all that yuckiness, here is some delicious food for thought:

There aren’t a lot of foods that make me squeamish. None that I’m truly revolted by except one: Olives. Nothing is more offensive than a bowl full of olives. Strike that. State fair funnel cakes are pretty foul. But I can live with those. Olives, on the other hand, are sneaky little buggers that have been ruining salads for the history of ever. Did you know that olives are actually in the fruit family? That poor, poor family. A perfectly delicious reputation stained by the ugly little step children. And they really are ugly. The green ones have eyes. If I had to banish a certain food from the universe, that’d be the first to go. I can’t even think of four more that I’d get rid of; all this olive talk has messed with my brain. 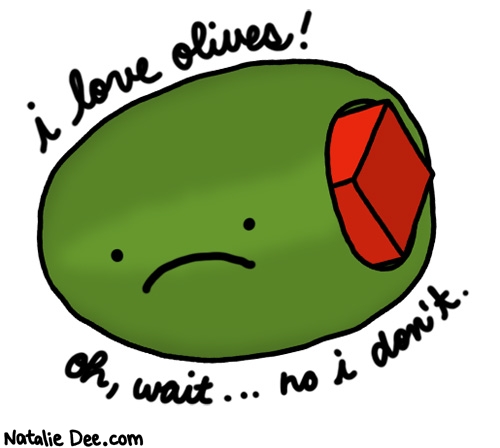 I love to eat. I eat without question. Without emotion. Without judgment or prejudice. More machine than man, I have the power to devour. However, there are foods that do not belong. They have coerced their way into the realm of human consumption without warrant, purpose or function. But, no more. I’m taking a stand. For myself. For my children. For my food, my future… my freedom. These five foods… I banish thee.

Candy Corn: It is neither of those things. How can you name something two NOUNS and that thing is neither of those things? People get sued over that stuff. It’s more of a lie than it is food. Plus, what kind of monster names a candy after a vegetable? Who exactly do you think you are fooling candy corn? The jig is up. You’re gross. And, for those of you who refuse to join me in my crusade against candy corn ask yourself one question: In the next few hundred years, when the world candy treaties are signed across a unified globe of nations, what side of history will you be on?

YOU: Well, I brought some water to a boil. Then drop this small bag full of leaves and twigs in the water to soak, and then I drink it.

ME: You put a bag of mulch in your water?

YOU: It’s not mulch. It’s leaves and sticks and…

YOU: It’s not mulch!

YOU: It’s not dirty water. Well, it is, technically… but not the way you think it is.

ME: I don’t understand… did you lose a bet or something?

YOU: No! Stop it! Tea is good for you. Want to taste it? It’s called Green Dream Baby Laugh.

Black Licorice: It’s just melted down old tires, right? It’s what’s left over and gathered in landfills when environmental criminals burn piles of tires. It’s not even food. It’s a byproduct of illegal behavior. Besides, food has to give your body something of substance or value. The only thing I’ve ever experienced after mistakingly eating a bite of black licorice was a week of night terrors. When people accidentally eat black licorice they react like they’ve been shot with a poison dart in the tongue. But, there is always someone you know that has some crazy second cousin or distant relative that loves black licorice, and that family charges the neighborhood kids a nickel each to watch him eat it without dry heaving.

The Pecan: No one can pronounce it. Say pecan. Nope, you’re wrong. Keep saying it. You’re still wrong. God forbid you say pecan in front of another living soul. Say pecan in earshot of anyone and that person will be whole heartedly compelled to correct you in some overly pedantic way like they have a PHD in nut grammar.  “Its not pecaaaahhhhaaannnneeeee. It’s peeeecccooouuugghhhnnneee.” Pecan has 5 letters in it, is pronounced with 18 letters (6 of which are silent), and is broken down into 12 syllables.

Banana Now & Laters: Not now. Not later. Not ever. It’s not a candy. It’s not a food. It is a personal affront. If someone presented me with a banana flavored Now & Later, I’d fight them. I would slap that horribly offensive gelatinous square out of their awful little carny hands and challenge them to fistacuffs. Imagine if a panda cub approached you riding the back of a baby elephant. Think of how incapably cute and arrestingly adorable that would be. And then that panda cub extended its wonderful little panda cub arms, and opened its little panda paws to reveal a rainbow of light. And then, the elephant, with it’s baby trunk reaches into the rainbow of light and presents you with a banana flavored Now & Later. Imagine the spectacular nature of it all. The indescribable beauty. The joy that such an event might bring to children. To adults. To the world. I’d punch that panda in its adorable panda face.

Your turn. Speak up. What food would you banish?